You are here: Home

Creative Mullumbimby was formed to foster artistic impulses to build unique community character and instill a sense of ownership in those who create and enjoy the art. Values and encourages engagement and participation. It conducted the Big Picture Show in May 2014, a highly successful public consultation seminar attended by over 400 people exploring the town's cultural directions.

Suvira McDonald, Artistic Director of the Mullumbimby Sculpture Walk, produces sculpture for the public domain. In addition, his practice includes a spectrum of sculpture related activities including ceramics, exhibition coordination, project management, consulting and teaching at tertiary level.
He is essentially a landscape artist and works with various media. Much of his work is in ceramic but working in the public domain often requires the robust materials he so often adopts. Old fence posts, discarded metal objects, rusty machinery: the detritus of times past. Embedded in these found materials are histories forgotten, remembered and reimagined into visual narratives.
His involvement with the Mullumbimby Sculpture Walk is seminal; he recognised the existing bike path as a potential sculpture walk in 2007. His perseverance and sustained effort has resulted in the current gathering interest.
His work is in collections worldwide and has produced work for public places at various sites in Byron and surrounding shires. He holds a Masters Degree from Southern Cross University, awarded in 2000. 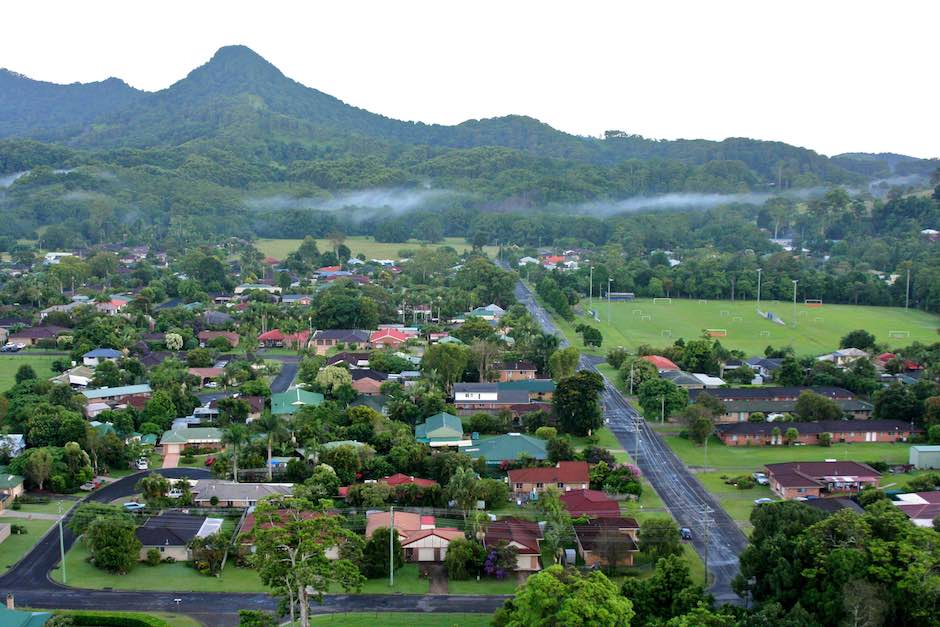 Mullumbimby - "Biggest Little Town in Australia" is in the Northern Rivers region of New South Wales, Australia.
Located at the foot of Mount Chincogan in the Brunswick Valley it stands on land originally occupied by the Bundjalung people.

The name Mullumbimby was given to the district by Aboriginal people possibly because of its proximity of Mount Chincogan.

Mullumbimby is a farming community, growing bananas, sugar cane, with cattle and dairy farms around the township. The natural environments, ecosystems, and landscapes in which the community is situated, was originally dense subtropical rainforest and is now a mix of constructed parkland, and riparian rainforest regrowth. Land care groups have worked to protect, nurture, and restore this landscape to bring nature back into intimate contact with residents.

During the transformative 1973 Aquarius Festival time, Mullumbimby attracted significant numbers of artists and continues to attract them. Mullumbimby is a colourful, spiritually rich, lively community with a very distinct character that results from a multi cultural mix of people. It hosts several festivals including the Mullum Music Festival and the Byron Spirit Festival.

The unique histories of both built and natural environments of this community results in complexities, richness, and layering of history, environment, and architecture with diversity and distinctiveness.